Recently we had a heat pump (A/C, air conditioner, AirCon) installed. The indoor units came with the usual IR remote, but they also had a built-in WiFi module along with a smartphone app to control them from anywhere. I'm not a big fan of connecting home appliances to clouds for a variety of reasons:

Don't get me wrong. I love when appliances offer some sort of API to control them externally. And I see why a cloud-service is a nice addition for a lot of people. But I prefer local control.

My heat pump came with a MAC-577IF2-E adapter built-in. So I set out to try and locally control the unit via WiFi. If you're in a hurry, I'll save you some time: I didn't succeed. But here is what I did find out, in the hope it can be useful for other people.

I started by looking around to interesting projects: I found the meldec GitHub project that can decode the messages sent to MELcloud. Another related project I found was HeatPump, but that focuses on communicating directly with the unit over its serial interface.

For setup, I switched the adapter into Access Point mode. After associating with it using the SSID & WPA-PSK printed on the box, I could connect to a web-server to configure the network settings. The page was fairly simple: 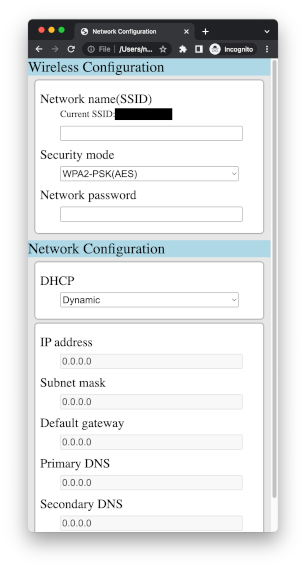 Once the details were filled in, it connected to my home WiFi network just fine. The MAC address of the unit stats with 70:61:BE, which is assigned to Wistron Neweb Corporation. After requesting an IP via DHCP, it started to phone home, of course. First thing it did was a DNS-lookup for production.receiver.melcloud.com.

The first request to that domain is a plain-text HTTP POST-request to /synchro:

The response contained the current datetime:

So far so good. The next connection, however, was an encrypted HTTPS request to the same domain. production.receiver.melcloud.com presents an HTTPS certificate that is signed by MELCloud Root Authority, and thus not trusted by browsers (by default). I tried to redirect this request to my own server, presenting a look-alike certificate chain. But the device refused with an Unknown CA error: it didn't like my own spoofed CA and wanted to see the actual Mitsubishi CA. Normally, I consider this a good thing for security, but in this particular case it's a bummer...

There also seems to be a webserver listening on the device itself on TCP port 80. But according to nmap, there is nothing else listening on TCP (all other ports are connection-refused). Note that a normal nmap-scan crashes the web server, so you won't see it as open on a consecutive scan.

But the web server seems to be locked down: requests to / require authentication, which I don't have/know:

Some URLs do work without authentication: /license, /common.css, /javaScript.js work. Others return a 404 instead of a 401.

Someone posted the firmware to GitHub. Time to brush off my reverse engineering skills.

Based on a simple strings of the firmware, I found C:\sdk-ameba-v4.0c\component\common\mbed\targets\hal\rtl8195a\gpio_api.c. So it looks like the hardware may be an Ameba 1. This houses an ARM Cortex M3 CPU clocked at 166MHz with 2.5MB of SRAM and built-in WiFi (2.4GHz only). I used radare2 to disassemble the binary, and kept the ARM Cortex M3 Instruction Set Reference nearby. It looks like the SDK for this SoC is available on GitHub.

The Flash layout section of the memory layout PDF from the SDK contains some information on the boot loader process. From the description, it seems that an image starts with a 4-byte length, a 4-byte address, and 8 bytes of 0xffffffffffffffff. The Memory Mapping section of the RTL8195A data sheet tells what address is mapped to what hardware. Based on that info, the firmware contains two sections:

While scrolling through the strings output, the function at 0x3001de60 caught my eye: It's the only place to reference the string 401 Unauthorized. The only place where this function is referenced, is around 0x30028984. This section loads the string Authorization, and calls a function (I'm guessing to find this header). Next, it checks if the returned value (?) starts with Basic, and passes the rest of the value to 0x30028820.

0x30028820 seems to be the "verify authorization"-function. It seems to iterate through a linked list of entries, checking the path (?). If the entry matches, the base64-auth-value is compared to another attribute of the entry. If it matches, the "return a 401"-part is skipped. Interestingly, the comparison is done by first memcmp()ing, and later verifying that strlen() is equal. The actual memcpy() implementation is in ROM, but it's possible this is vulnerable to a timing side channel (although doing timing side channels over WiFi is hard...).

0x300696bc looks interesting: it seems to contain a list of paths & usernames. The entries seem to have the odd size of 0xe7=231 bytes.

Based on /license, I'm assuming "no user listed" means "unauthenticated".